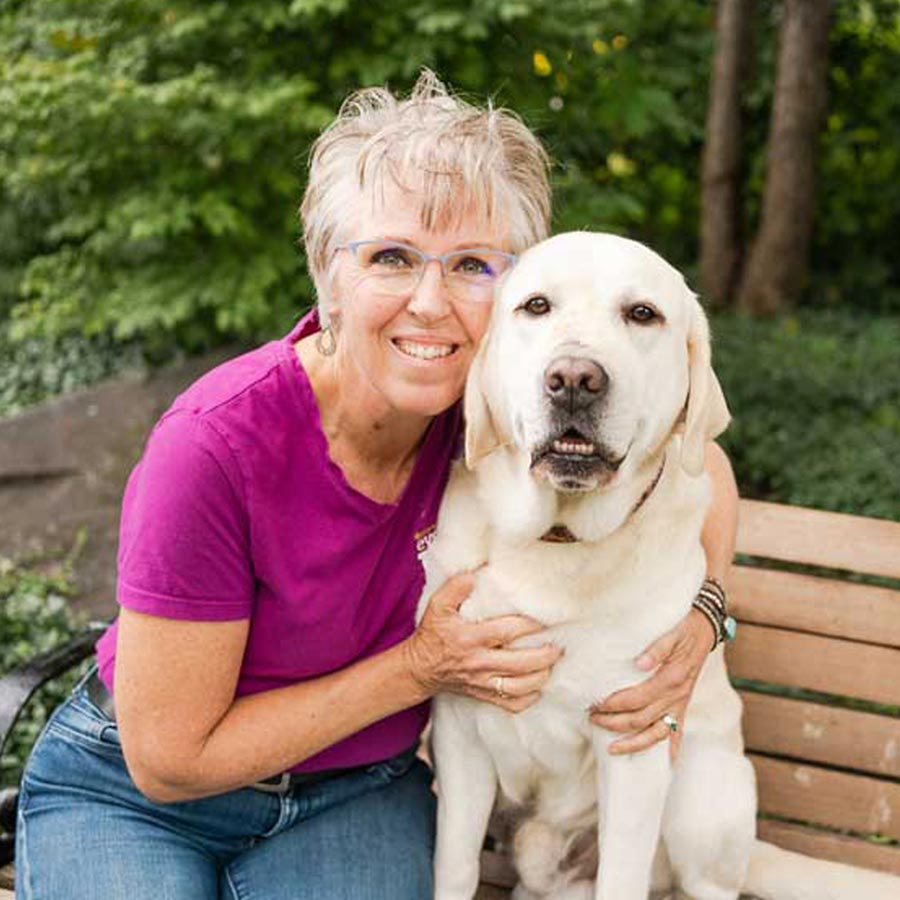 Welcome, so glad you are here, I’m Denise Mazzola, Certified professional dog trainer, people person and behaviorist. For 30+ years, I’ve worked with dog owners who are feeling blamed, shamed and so, so frustrated by their dog’s behavior. I help them understand who their dog is genetically, how their dog learns, so everyone can live harmoniously.

Most of you have already worked with LOTS of different trainers. First, let me say I am sorry you and your dog have been through what might have been a negative experience. I’ve heard a myriad of stories; some are horror stories of the “techniques” that were used on your poor, frightened dog.

You adopted, rescued, or purchased a puppy or dog because you wanted to share your life with a furry companion. You had dreams of bringing her everywhere with you, family gatherings, kids sports, hiking or walking with her. You fell in love with her antics, the way she looked you in the eyes, and her predominantly joyful self.

I, 100% believe that you are and can be your dog’s hero. You are the only person who can do the work and help your dog.

My job is to help you, support you, guide you, and teach you.

Your job is to help, support, guide and teach your dog.

It’s a marathon not a sprint. It gets better. I promise.

It’s the painful events in life that have the biggest impact. Those experiences shape us into who we become. I had several that shaped my dog training career.

As a Child, I taught our family dog all kinds of tricks and behaviors using treats. There wasn’t any internet or youtube to help me. I worked with her from my heart. I was also the kid that seemed to find every loose dog or injured animal. I once found a baby robin and nursed her back to health in my bedroom. It was a family project. I had a warming light on her and my dad asked the zoo director what to feed her, how much and how often. Darn that baby bird could eat 16’ of worms a day. We dug them up and bought them daily! I painted her nails red so I could “recognize” her when it came time to let her go. I was heartbroken when it was time to let her fledge.

I have a vague memory of being bitten by a dog while at a country store. My father asked what I did! I said I tried to pat him. My dad looked over at the dog who was casually chewing on a bone! That’s when I learned the valuable lesson to leave dogs alone who have a bone. I still believe this. Dogs are dogs, not people and they aren’t all hard wired to share their food or bones.

After college I moved to Breckenridge Colorado to ski. I also bought my first dog, a Samoyed I named Neige, which means snow in French. I was clueless. I think he was four – five months old when I walked him one morning without his leash. Honestly, what was I thinking…not much at 23 years old. Shockingly, I couldn’t get him to come back to me. He was playing with another neighbor dog. I know now that he was in a developmental stage called Flight Instinct Period, meaning I was no longer the most interesting thing to him, and he wasn’t magically coming back to me. AND I also know now that a Samoyeds were bred to be independent thinkers, to love the cold and he had genes dating back thousands of years making him a Natural dog. I went to work and left him out. (I know, I know, I can hardly write this!) Later that day, he was hit by a car and killed. It was a hell of a lesson to learn. When I moved back East, I enrolled in obedience classes with my new Samoyed, Alex. We went on to compete in AKC obedience and I became an obedience instructor.

Fast Forward, Im married with three daughters, Twenty+ years ago, I adopted a puppy from the shelter where I worked. Puppies are blank slates, right? I had dreams of him being a therapy dog as well as a great ambassador showcasing the results of training and socialization.

Puppies are NOT blank slates. And Love isn’t always enough.

He was well trained. He was well socialized. I had three-school aged
daughters to help, and their friends.

He went everywhere with me including work.

At age 2 +/- his behavior started to change. Two is social sexual development in dogs. They become an adult. And problematic behaviors that had been bubbling under the surface unnoticed rose to the top.

He started guarding things; the dishwasher, me, bags of food, and anywhere he slept. He started light and shadow chasing. He attacked the windshield wipers.

He terrorized the children’s friends and had to be carefully crated in the master bathroom with both the doors closed.

And still I worried.

Biting someone was a real possibility and biting a child seemed even more probable.

Then early one morning he charged at a young child on a tricycle. Thank God the mother picked up the child before our dog got him.

How could this be happening? I adopted him as a puppy. He was a blank
slate, never abused, well trained and well socialized.

I knew I wasn’t to blame. I DID everything right! Yet here I was.

I began to wonder how other dog owners feel when their dog shows
aggression.

You feel frustrated and confused.

You love your dog and you do not want to give up on him.

Thus, my dog training journey took a sharp turn towards aggression, types of aggression, causes, training, genetics of the dog, and how to help the dog and you, the owner.

I’ve trained with some of the best in the country. I’ve worked with thousands of dogs and owners, teasing apart the dog’s history, educating, supporting and developing training and behavior plans. 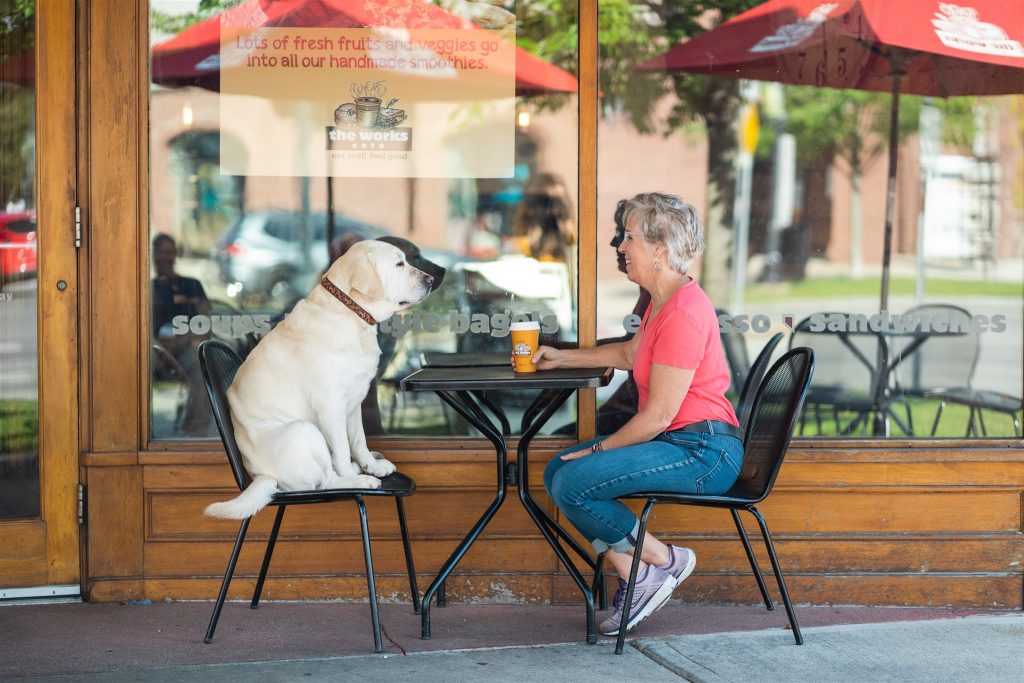 Ok, here’s all the boring and technical stuff you may be interested in.

Denise Mazzola is a Certified Professional Dog Trainer-Knowledge Assessed, and she was one of the first 500 to earn this certification.  Denise is a people trainer as much as a dog trainer because every dog comes with a person and/or family who loves them. What makes Denise different? Her thorough understanding of the science of behavior and dogs genetics sets her apart as well as her empathy for the people and dogs she helps. Denise has also earned the Family Dog Mediator distinction from Kim Brophy, author of Meet Your Dog.

An expert dog trainer and highly respected professional in the dog training world, she trains others to be dog trainers and professional dog walkers. She continues to polish her own skills by regularly attending workshops and seminars with the best behaviorists and trainers in the field, including Parveen Farhoody, Bob Bailey, Jean Donaldson, Dr. Ian Dunbar,  Brenda Aloff, Sue Sternberg, Trish King and most recently Kim Brophy – author Meet Your Dog.

Denise has been hosting a monthly Ask the Trainer call-in radio show on WKBK1290 for over fifteen years. You can hear her live on the radio the last Monday of each month. Call or email your questions to the studio. She also produced and directed Doggie Dilemmas, a cable-access network. She writes a monthly column for her business newsletter. In addition, Denise originally coordinated the therapy dog visits for the Student Relaxation Day at Keene State College. As the program grew she handed it to the Monadnock Humane Society’s Therapy dog program.

When she isn’t working Denise works out regularly and fully believes that you need to “use it or lose it”, She hikes in the White Mountains of NH and is currently working on completing the 48 – 4,000 footers and 52 With a View list. She and her wife, (and business cohort) Amy Willey, CPDT backpacked the Presidential Traverse a 22-mile hike and the Pemi Loop a 32 miler. Giovanni, Gio is her yellow lab. They are working on their Nose work three title, and he is trained to find and retrieve sheds. (Dropped antlers) You can see Gio sitting in a chair next to Denise during her Facebook lives as well as in many of their youtube videos.

She spends as much time as she can with her 3 adult daughter’s and is madly in love with her two grandsons, Jackson and Joey.

Her favorite book is Kim Brophy’s Meet Your Dog and most of Judy Picoult’s books and her favorite movies are, Seabiscuit (The underdog and faith), Secretariat, (believing to your core and tuning out everyone else, all the nay- sayers) and Pride & Prejudice (True love will prevail and speak your mind even when it’s not polite!)

Ditch Your Dog's Aggression in 5 Steps 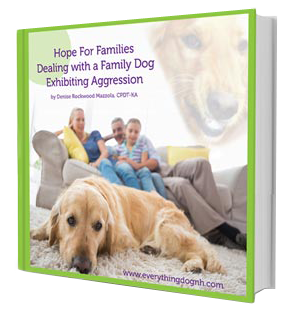